First off I had to figure out how this thing works: gotta make jpg to upload using one script then another script to paste the img src in and you have to write everything using HTML by hand. Low overhead though. Oh, and I discovered that since moving to this new webhost (3-4 years ago??) I should have changed the .httpd file paths and that none of the directoies were protected anymore! Security by obscurity I guess. ":^)

For the past few months I've been testing a trail temperature sensor/sender that I made and installed in the woods where we mt bike. It uses a Hologram.io Dash arduino/cell board combo that wakes up from deep sleep (power saving mode) and reads a temp/humidity sensor, then sends a packet of data to their servers, which bounces over to this server and I send it off to Wunderground, into my own database so I can graph it over time, and a text file to allow quick checks of most recent reading. The graph shows both the pack voltage and temperature, the spike on the left being where I put a new battery in. I chart this so I can know when it's time to go out and replace the battery. I think it will also send me a message, but I haven't tested that part yet.

The green case was made by fellow mt biker Mike H. who teaches over in Hartford, one of the subjects being 3d cad/printers. We're still fine tuning the case and testing out what will be in it. The idea is to keep moisture & bugs out of the electronics, while having an opening for the temp/humidity sensor to read humidity. I bought a small solar panel, thinking maybe that could be used to charge it, but it would require being near an open area with sunlight and I'd rather have the temperature be read in the "deep" woods. Also and it needs to keep out of sight so no one messes with it. 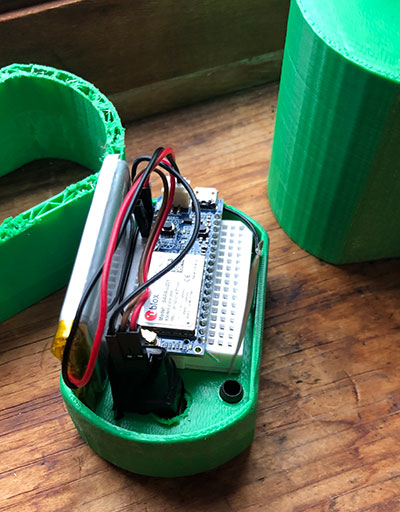 After success with this I've purchased a number of small wifi arduino devices and have been experimenting with sensors in the chicken coop, around the house, even one in the garage that can trigger the door openers. There's a raspberry pi I've set up (teeny linux computer, a little bigger than a couple sticks of gum) that's running software called HomeBridge which can be used for bridging these IoT (Internet of Things) devices to HomeKit from Apple. This means I can look on the app to see the readings or control switches, and even ask Siri what a temperature is or to open a garage. A little fussy, but interesting!

That led to 3D printers ... of course. A couple weeks of watching videos and reading reviews (oh boy, there is a lot of information and types/issues/opinions!). My son and I settled on a nice one from Prusa, a bit on the expensive side, but well supported and nice. The only problem is it wouldn't ship for a couple months. Also, to be honest, we might find 3d printing to be boring or too much work. So I ordered a cheap < 200 dollar 3d printer that has a bunch of how-to videos on YouTube (including how to fix/improve), figuring he and I will have some quality learning time together trying to build it and get it running well.

It's all been interesting. I did a lot of electronics reading and experimenting when I was younger, there was the electric car project, some of the companies I worked for made electronic devices, and then I kind of fell out of it and mostly did programming. But now there's just so many interesting things happening with small (micro) computing devices, electronics are cheap from amazon/aliexpress, and you can find a youtube video or github project for just about anything you buy or are interested in making. That and the abundance of network connectivity pretty much means you can do almost anything, anywhere.